This is a guide for directors, teachers and club owners, explaining in detail how to run an event using the RealBridge web app.

Directors are able to do all actions

Deputy directors have similar actions available but are unable to access:

In the lobby: Director and Deputy Director view

In the yellow band at the top of the screen

Under the yellow band—on the right

Under the yellow band, lower down on the right—chat

PBN files are validated before uploading. If your upload is not successful, check the file for any errors.

When you start a session, your settings are checked to ensure that you have set them to reasonable values.

The error message below is because you have omitted the session name.

However, the others are warnings, you can continue without changing anything.

Howell movement: verified by Ian McKinnon. Variation of Flower. The fastest pair should be seated at 1 E/W to minimize bottlenecks. See Limbo tables.

Only one person can be at the table as director at any time. A playing director can also be present, but only if sitting in a seat.

A Director (or Deputy Director) goes to the table by clicking in the middle of the table. Now:

When a director visits a table, they will now be able to have private conversations with players. Clicking the user + button will exclude a player from the conversation and clicking the user - button will include a player. Excluded players will still be able to talk to other excluded players. Please see the page called Advice on how this works with screens. This function will be useful for directors talking to players to make a ruling, as well as supervised sessions with teachers talking privately to students. 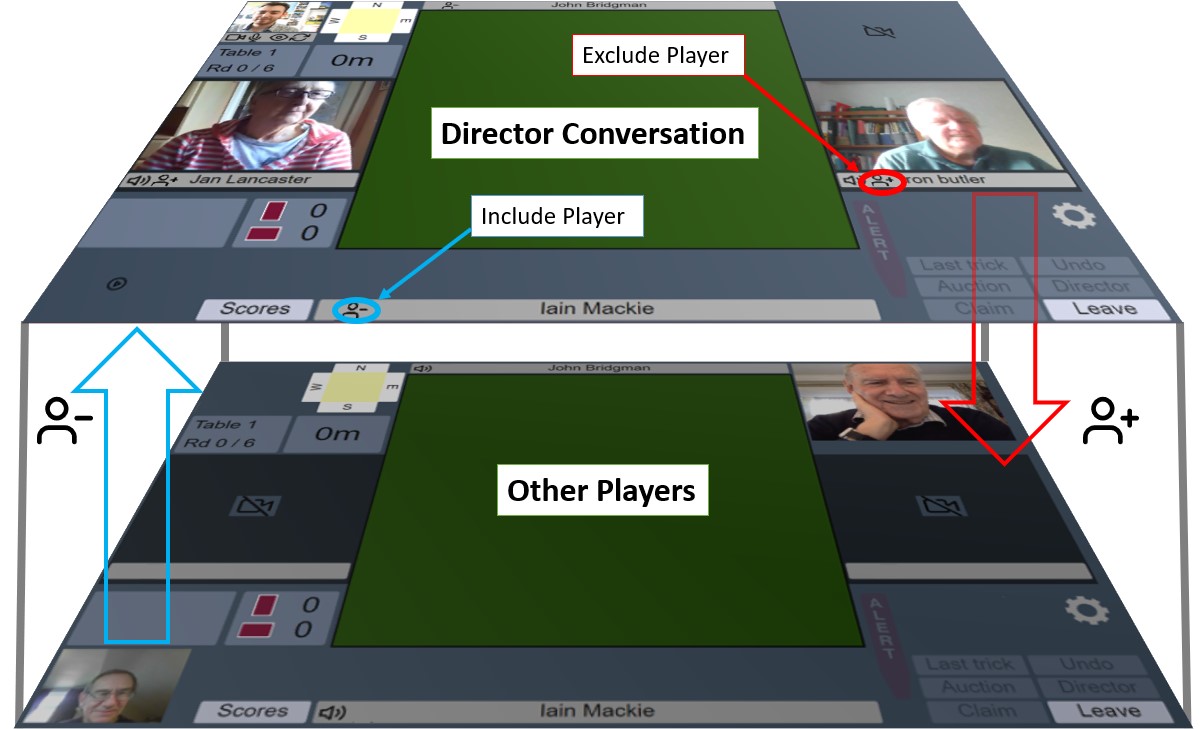 Click plus to add a table or tables before the event starts.

For adding tables after the start, see Game in progress.

For all teams events, the Director can input the team name in the box under the team number (directly typing on the table). This team name is displayed in all places that show results and information about the team.

At any time before the event starts, click Minus to remove empty tables, or to combine half-full tables.

Half tables and sit-outs

Half tables can exist. A half-table can be opened up to convert to a full table. See Game in progress.

RealBridge will not allow you to start a pairs or teams event with a completely empty table. If you need to add tables during Round 1, you will still be able to do it after starting the event.

Practice sessions can be started with some open tables set out. As people join, they can sit and start. So you can start on time (or even a bit early) and easily accommodate latecomers.

Starting the first round of the event

Do not start a pairs event with two half tables. If you do that, and then the holes do not get filled in, you will be stuck with two sit-outs.  Before you start the event, click minus to shuffle up any gaps.

The Start round 1 button starts the event. After clicking it, click Confirm.  See Moving players for the next round.

Adding tables during Round 1

In a pairs event, tables can be added in round 1 only, not later. That is, before the move for Round 2 has been made.

In a teams event, you cannot add a team after the start.

Opening and closing seats during Round 1

In a pairs event, if you started Round 1 with a half-table, or if you have added a table after starting, the empty seats will have the words "Open the NS seats" or "Open the EW seats". To allow players to sit, click this. It is not possible to open late tables in Swiss pairs.

Starting play with a late-arriving pair

Once a table has been filled up if you want to allow them to play the first round, go to the table and click Play round. If you don't do this, the players will start with Round 2.

If you have added a table during Round 1 but you don't need it, remove it by clicking the - Late table button. This method will not combine two half-tables.

In a Mitchell or Howell, if a pair leaves during a session, you are now able to remove them from the results. The pair becomes a sit-out.

To do this, go to the second page of the Advanced Director Actions. Select the pair that you wish to remove and click Destroy. This action removes all scores for the pair, and also the scores that other pairs got when they played this pair. Note that you can not undo this action. 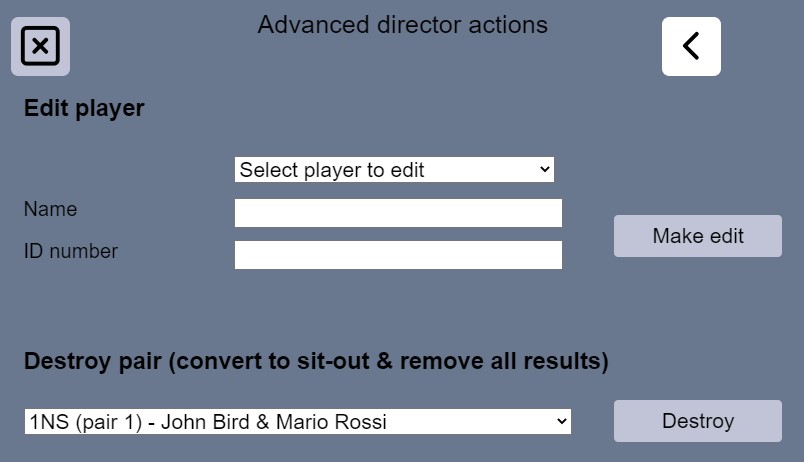 The buttons for adding and removing late tables do not exist after the move for Round 2.

Meaning of numbers on the tables

Looking at a table from the lobby, you can see how far through the round they are:

It is within a player's rights to pause the round after a board has been finished for the purpose of calling the director. By pressing the pause button all players at the table will wait for the player to click OK before the next board is presented. The primary use for this feature is during a tournament, but also can be used in practice tables to help with teaching.

When a player clicks the pause button, the player's name badge turns pale red, visible to all players at the table and from the lobby. This is useful for a director to see if play is being stopped and can use it as a prompt to visit the table.

Moving players for the next round

When more than half the tables have completed the round, the Move button is displayed and enabled for the Director. The name of the button shows which round it relates to.

It is nice to make an announcement prior to moving, allowing people to finish their conversations. (will change soon)

When the Move button is clicked:

If necessary, the Director can END a board. See End deal.

See the previous section, Moving players for next round.

Limbo tables have the same table number as the table that the pair are waiting to go to.

At the limbo table, they get a notification in the middle of the table explaining why they are waiting.

From the lobby, the appearance is similar to a grey overlay on the table. It is a good idea to compare this to a half table and a table that is waiting for opponents. The key is to look at the table adjacent to a late table. See Scoring & movement notes for details of movements.

Depending on the mode of play, these can range from liberal (allowed to undo all the way from Trick 13 to the beginning of the auction), to entirely disallowed. The current implementation only allows liberal undos. (will change)

After an undo request, the undo must be resolved before play continues. Possible resolutions are:

Declarer or a defender can claim. A claim can be made any time after the opening lead.

After declarer has claimed, both defenders are prompted to accept or reject the claim.

After a defender has claimed, declarer and the other defender are both prompted to accept the claim. (This is because a defender is allowed under Law 68B2 to object to his partner's claim.)

After a claim, the claim must be resolved. Possible resolutions are:

Director utilities while sitting at a table

This view is seen by a director when they join a table by clicking the middle of a table. (This is not visible to a playing director - sitting in a playing seat). 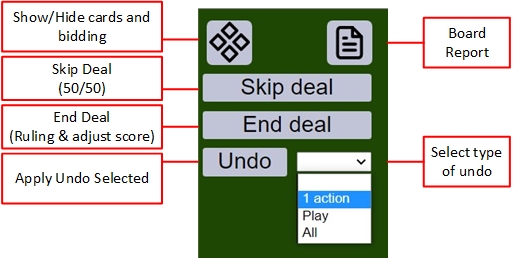 This button shows or hides the cards and bidding. This is useful for a playing director who does not want to see the cards/play/bidding of a board they are also playing.

This can only be done by a Director at the table as director, and only after the cards have been displayed to the players. Skipping awards 50/50 as the default (artificial) score and discards the auction and play that has happened so far.

This can only be done by a Director at the table as director, and only after the cards have been displayed to the players. Play ends at that point. Initially, the score shows the tricks taken by declarer up to that point. If the play has not started, the result is shown as Passed out.

Normally, the Director will modify the result afterward from the scores window. See Adjusting scores.

A Board Report shows all bids made and cards played, with the time taken for each bid or card. The director creates the report by clicking the button shown below. This button is available at the table for a board currently being played, or in the replay for a past board. Only a director has this functionality.

When the button is clicked, the report is copied into the clipboard. Then to view the report, open Notepad or any other text editor (or Excel or Word), and paste the report there. An example report is shown below on the right. 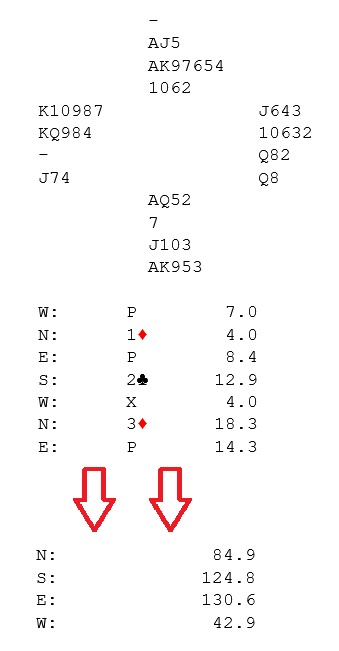 Note that undos remove previous bids but still accrue time. For example, if a player bids, requests an undo, has the undo accepted, and selects a new bid, the new bid is the only one in the report. The reported time is the time from when the player's turn to bid started until the final bid is made.

Directors are able to apply undos to the table. The types of undos available are to undo a single action, undo to the beginning of the play, or undo to the beginning of the bidding. The director should select a type of undo in the drop-down menu and then click the "undo" button. This is mainly for quick undos for teaching. Note the undo is applied immediately and that the players are not able to refuse the undo.

Click the USEBIO button and three files are generated by the system. These can be saved. (will change slightly)

Windows command to save: right-click

Mac command to save: CTRL and click at the same time

As a Director/Assistant Director, the chat window shows what you have seen during the entire session. If you join a table, you do not see chat that was typed before you arrived. If you leave RealBridge and rejoin the chat window is empty it is as though you have never been there before.

The Director can make audio/video announcements to all the players simultaneously. To make a video broadcast to everyone logged into a session, go to Advanced and navigate to the second page. From here, there are options to broadcast to all players (both at tables and in the lobby), or only those in the lobby. During this time, all video and audio between players stop, and card play is paused. As a broadcaster, it is important to wait until the Please Wait message disappears before speaking, otherwise some players will not receive your full message.