The Howell movement which is used in RealBridge for tables 2 to 12 can be downloaded here.

The movement is described with numbers denoting pair numbers. Each row in the table denotes a round. In round 1, pair 1 plays pair 2, pair 3 plays pair 4, etc. The first number in the tuple is the NS pair, and the second is EW.

In a Swiss or Round Robin teams, using VPs, with an odd number of teams, sit-out matches are scored as 12 VPs.

Similarly, in a pairs using VPs, with an odd-number of pairs, sit-out matches are scored as 12 VPs.

These results are included in the USEBIO file.

See here for the multi session round robin guide

How a triple works

While the rest of the teams play a normal Swiss match, the teams in the triple play two half-matches, in a three-team round-robin.

If there are an odd number of boards per round, the teams in the triple play one fewer board. eg:

The EW pairs in the triple are moved automatically by RealBridge at the start of each half-match.

There is no scoring break between the two half-matches.

No comparisons are visible to the players until they have completed both half-matches.

Boards in the triple

The triple uses the same boards as the rest of the matches, and one extra half-set. The board numbers used are in ascending order, so a team that is not in a triple will miss out some board numbers. eg With 8-board rounds:

Who plays in the triple?

The system assigns the lowest-scored teams to the triple, except that if possible it avoids:

As with standard Swiss assignments, you can see who will play in the triple using the Show Draw button in the Advanced menu. For example:

In Session settings choose Practice. Choose typically either 20, or 32 boards. Choose 1 round. Add some tables. Name them if you want. Open and start the session as normal. Players can join and sit in the seats. If you need to add more tables, you can do via the normal functionality for adding late tables. The logging system only charges for tables that were used.

This is the bare minimum you need to know a teams of 8 session with 2 teams (like the figure above).

To make a simple teams of 8 session:

(Note: No players will ever need to leave their seats.)

Team – Made up of several constituent teams, for example, players from a particular club. Eight or more players per team.

Constituent team – A team of four, forming part of the larger team. This is different from a standard round-robin where each group of four is a team of its own.

3. Example of movement for constituent team 1

Note: The numbering of the constituent teams in this section is the same as the table number.

You can set up the config file for teams of as many players as you like, for example, the figure below shows teams of 12. 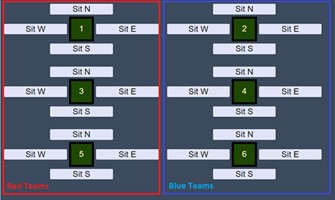 There are three supported methods of scoring supported by RealBridge. To select a scoring method, you must change the big_team_scoring to the USEBIO descriptor: "ximps", "imps" or "agg".

There are several ways in which you can set up this session. The standard way would be as follows:

For two teams of eight.

The match assignments here follow the example given in Section 1.

If you are running a session with teams of more than 8, you will need to change big_team_size and big_team_spacing.

Please note, for any teams of 8 or more session, the correct match_assignments will need to be included. The following are the correct movements for a 2 teams of 12 and teams of 16 event.

For the full PBN file (which contains the bidding and play at each table):

Note: The “Home” and “Away” designations are just arbitrary values that are assigned in the PBN file, for compatibility with other systems. They do not affect any functionality within RealBridge.

The "PBN with play" file contains extra data in a comment line starting with “% RBDATA”. This is used to record additional information about the play, outside the scope of the PBN spec. The information included is:

This is mainly intended for use when the file is imported into another RealBridge session, but consumers of the PBN file are welcome to use it. For further information please contact support@realbridge.online

If a result in the PBN file was an external result created by import from an input PBN file, the PBN record contains the comment “% RBIMPORT”. This is used by RealBridge to avoid duplicating a result with bi-directional imports. Consumers of the data may find this useful to avoid ingesting a result that had originally been imported from another session.