Please try to remember to put the session name in the yellow band at the top of the screen. Use a meaningful name. This name:

After an event is finished

To make use of the results server, you must not reboot the session, otherwise you lose your “permanent results”.

Good housekeeping is to:

After you have done this, the link stays active forever, and it takes the players to the results.

Remind players to use the redial button every hour, or at other times if they notice video or audio problems. It is the pair of curved arrows near their name, to the right of the eye.

Going to the table as director

It is always better/safer to join the table by clicking the table, unless you are intending to play.

In particular: during Round 1, if there is a sitout pair, avoid sitting in the missing pair's seats. If you do, the movement will think you are going to play.

Playing and directing at the same time

You need to log in twice, once as a player, with your usual full name and once as a director, appending "TD" to your full name.

For one device, using the same browser, open two tabs and log in as stated above. One option is to put the windows side-by-side. Alternatively, if you have two monitors, arrange one window on the left, for playing, and one window on the right, for directing.

If you use two different browsers (eg Chrome and Edge), then your camera will only work on one of them.

Use two devices. For example, one computer for playing, and a tablet (or smartphone) for directing. It is possible to direct using a smartphone, but not to play.

Ask every team to sit at their table. The Director starts Round 1.

You might wish to ask the captains to agree on who is going to change seats. Or perhaps, you can agree that the even numbered teams change the East/West to North/South.

Of course, if you want a compulsory change of opponent, then you need to agree that both teams in the match don’t do the same thing.

The rest of the match follows as in the above steps.

These are independent options, but they tend to work better together.

If the director comes to the table when screens are in place, the director appears on one side of the table, according to these rules:

The director can use the +/- buttons to have a conversation with any or all of the players.

There are a few occasions when the screens will not be active (all players can see and hear each other). These occur:

If North or South requests an undo after their screenmate has bid, the action is already visible on the other side of the screen, so both opponents see the request.

If East or West requests an undo, the action is already visible on the other side of the screen, so both opponents see the request.

The appearance of the bidding box is different from normal when self-alert is selected. For details, refer to the player guide. When the player makes a bid without providing an explanation and then later provides an explanation, RealBridge makes a record of the post-bid explanation by presenting the delay in square brackets. 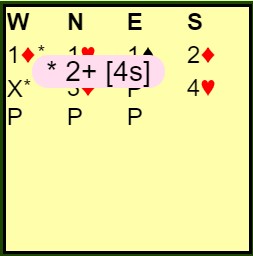